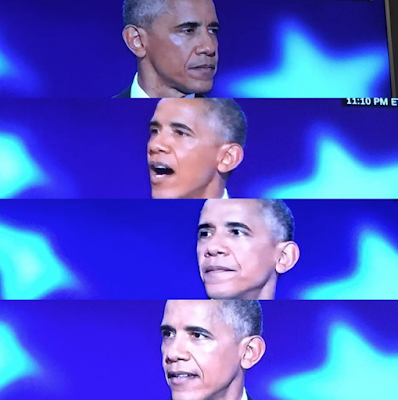 
"President Obama will go down in history with Abraham Lincoln as one of the presidents best able to articulate a nation's anguish as well as its promise. I don't think we'll see his equal for a while," writes my longtime friend, Jack Ewing, European Economics Correspondent for the International New York Times.

Here is part of Obama's speech at the DNC convention in Philadelphia. He is brilliant and should be knighted for his leadership and integrity.


"See, my grandparents, they came from the heartland. Their ancestors began settling there about 200 years ago. I don't know if they had their birth certificates, but they were there.
They were Scotch-Irish mostly, farmers, teachers, ranch hands, pharmacists, oil rig workers. Hardy, small-town folks. Some were Democrats, but a lot of them, maybe even most of them were Republicans, the party of Lincoln. And my grandparents explained that folks in these parts, they didn't like show-offs, they didn't admire braggarts or bullies.
They didn't respect mean-spiritedness or folks who were always looking for shortcuts in life. Instead, they valued traits like honesty and hard work, kindness, courtesy, humility, responsibility; helping each other out. That's what they believed in. True things, things that last, the things we try to teach our kids.
And what my grandparents understood was that these values weren't limited to Kansas. They weren't limited to small towns. These values could travel to Hawaii.
They could travel even the other side of the world, where my mother would end up working to help poor women get a better life trying to apply those values. My grandparents knew these values weren't reserved for one race; they could be passed down to a half- Kenyan grandson, or a half-Asian granddaughter; in fact, they were the same values Michelle's parents, the descendants of slaves, taught their own kids living in a bungalow on the south side of Chicago.
They knew these values were exactly what drew immigrants here, and they believed that the children of those immigrants were just as American as their own, whether they wore a cowboy hat or a yarmulke, a baseball cap or a hijab.
America has changed over the years. But these values that my grandparents taught me, they haven't gone anywhere. They're as strong as ever; still cherished by people of every party, every race, every faith. They live on in each of us. What makes us American, what makes us patriots is what's in here. That's what matters."
One more quote from Vice President Joe Biden's speech:
Ladies and gentlemen ... listen to me a second without booing or cheering. His [Donald Trump's] cynicism and undoubtedly his lack of empathy and compassion can be summed up in that phrase he is most proud of making famous: "You're fired." I'm not joking. Think about that. Think about that. Think about everything you learned as a child. No matter where you were raised, how can there be pleasure in saying, "You're fired?