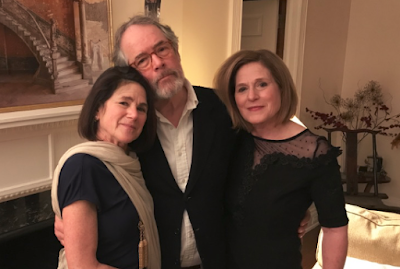 (Left to right) My sister Pamela and my brother Michael. I am so thankful for them.
I was returning to Phelps Hospital, where I was for two weeks on the acute in-patient rehabilitation floor. My stroke was mid-April. Perched in my room on the 4th floor, I could watch the seasons change as the grass, flowers and trees turned from spring to summer. Then during follow-up therapies, I watched them go from fall to winter. Today, the scenery is once again on the cusp of bloom. I was back to have my post-stroke, 1-year anniversary.
The entrance to Phelps has “P” in black and “helps” in red. Phelps Helps. The boxwood were trimmed just below the word “Emergency.” (Once when I was leaving in June, the flowers had grown to nearly cover the word. I thought, “How can you have a sign with the word ‘Emergency’ covered? What if there was an EMERGENCY?)
Today, I left enough time so that I could navigate the hallways, which can be confusing. One half of the hospital is 755 and the other is 777. I had appointments with my neurologist in 777, but had to drop off a form to retrieve my records at 755. I had also parked in the wrong place. No worries. I could do it.
I remembered walking the 4th-floor halls with my physical therapists. “Watch out for the walls.” “Over here a little more.“ I was slightly dizzy and weak. My vision was skewed. Why were their mouths so long? (I later learned that my eye muscles were temporarily weakened from the stroke.) I couldn't wait for the session to be over when I invariably crashed. The naps couldn’t come soon enough.
When I walked the 1st-floor with my OT therapist, everything was so confusing. There was more bustling with people coming and going in the lobby. In one of our sessions, she asked me to count how many fire extinguishers I passed from the OT room to the gift shop. I had to point and say, “Fire extinguisher” as I passed each one.
“You missed one,” she said patiently. Her challenge was steep for this post-stroke survivor. It was so hard to walk, watch and say “fire extinguisher.” “Oops, you missed another one," she said.
“Maybe it’s my eyes,” I said. I could blame a lot on my eyes.
Finally, we got to our destination: the gift shop.
“Find a Reese’s Cup, pocket tissues and a pair of earrings,” she said. “Then, take me to where there are things with a proverb written on them.”
Sounds easy. Believe me, it was challenging. I felt so slow-minded. I wanted to go to my room where there weren't as many people hustling around. And the noise. My brain couldn't take the confusion.
But today -- my 1-year anniversary -- was different. I felt stronger. I could walk straight -- both a straight line, and tall and straight. I was proud. I could navigate the noises, lights, and people so much easier. Even the fire extinguishers didn’t fetter me.
My neurologist was thrilled to see my progress. He asked what were some of my challenges.
My right side was weak but getting better. I was also self-conscious of my aphasia.
“You are talking much clearer,” the doctor said. “There is more hesitation between the words, and you speak softer, but it is clear. I don’t think you should tell people you have aphasia. They might not have even noticed.”
“Maybe I could use it to my advantage when I was talking on the phone with the bank or insurance company.”
He laughed and agreed.
That evening, I went to the market. A couple was there. She was picking oranges. The man was muttering something. He had a limp, a cane and a clenched hand. I used to have the same.
I empathized with what he was going through. I wanted to ask, “Excuse me. Did you have a stroke, by chance? I did, too.”
I was overwhelmed with gratitude for all I could do.