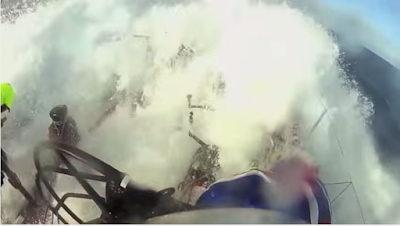 In followup to the earlier post about my friends sailing in the Pacific Cup 2016 ... yeee-ikes. It was 12 days of pounding and confused waves from every direction:  coming over the stern, the bow, the gunwhales. (Click here to get the drift.)

"We sailed under the San Francisco Bay and it was beautiful," my friend says as they started their journey to Oahu near Kaneohe Bay. "Whales were swimming nearby and we could see their tales going underwater. It felt like a great harbinger to a great sail ahead."

"It never let up," she continues. "There was no calm to relax, play games ... it was rough the whole way. Even at night, we were thrown around in our bunks."

Add to that the rotation of shifts at the helm. How would you like to be steering a 40-foot sailboat in huge seas in the middle of the Pacific on the 2-6:00 a.m. watch? "It was exhausting," she says. "Then the bowsprit broke off. We couldn't use a sail that was specifically chosen for this race and the weather conditions so we had to bear north."

Fellow sailors thought the team had cut loose from the Pacific Cup and were sailing to Alaska.

So how was it really?  "Miserable," my friend responds. "At one point a huge wave came over the starboard side, went under my foul weather trousers and filled my boots with water. I was freezing and night was coming, which meant there would be no chance to dry out and get warm."

Would my friend do the Pacific Cup again?

After 12 days of this malarkey (and thank you, Joe Biden, for bringing this great word back into play), they finally approached Hawaii ... right into another huge tropical depression. The winds were blowing over 30 knots. Because there was chance that they would smash the dock at the hosting yacht club, they had to anchor out and be brought in by launch.

This was my friend's second crossing. (The first was with an all-woman crew.) Her husband -- a hearty soul and amazing sailor -- has made 16 Pacific crossings. Right this minute he is underway sailing back from Hawaii to California, making it his 17th mighty crossing.

What an amazing adventure. I share my friends' pride in their successful sail across the Pacific and their landing safely in Oahu after this incredibly challenging ocean race.