I'm saddened to hear the news that George Bria passed away. It was my honor and privilege to interview him for my book, POUND RIDGE PAST: Remembrances of Our Townsfolk.  In the chapter, "On 'Stone Steps' and Remembrances of Mary," John talks about his adventures as a journalist for The Associated Press in their New York bureau, and then overseas as a correspondent in Italy during World War II.

"In Rome, during the war, I met up with Paul Brauer, a doctor in the U.S. Army, who was then Arlette's husband. We were in Rome together for about a year. Out families knew each other from stateside," he recalled.

As fate would have it, Arlette was George's wife Mary's best friend. They grew up in the city and together attended Brooklyn Friends, a Quaker school. Arlette came to Pound Ridge as Mary's best friend in 1929. George came to Pound Ridge as Mary's suitor in 1937. After Mary's passing, it was almost destiny that he and Arlette, then a widow, would marry in 2000.

George was a master gardener and storyteller. It was my pleasure to write about him in Pound Ridge Past. Here are a few pages from the interview ... 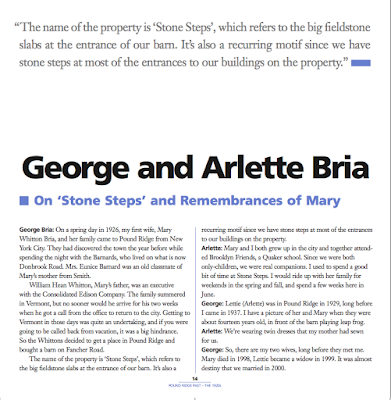 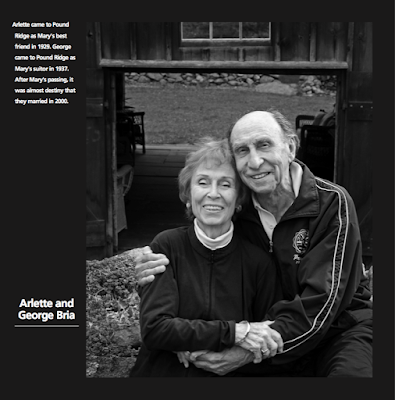 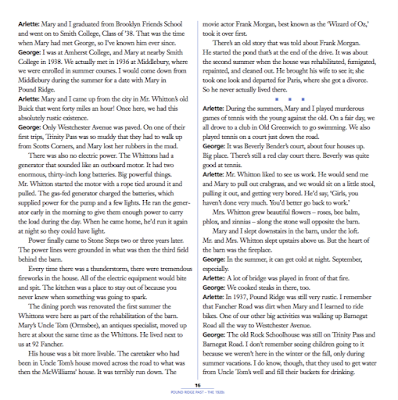 * To read more about George's remarkable life, copies of Pound Ridge Past are available at
Booksy Galore in Pound Ridge; The Reading Room, and Little Joe's Books in Katonah.

Posted by Bonni Brodnick at 3:07 PM

One can't know that what is going to happen next!Before going,you definitely would not have any clue that you will have a stroke!Last summer,My mother also had a stroke and i remember that how terrifying it was.I just hope that everyone stays healthy!

It happened totally out of the blue ... and if it happened to me, it can happen to anyone.
I hope your mother is doing well.