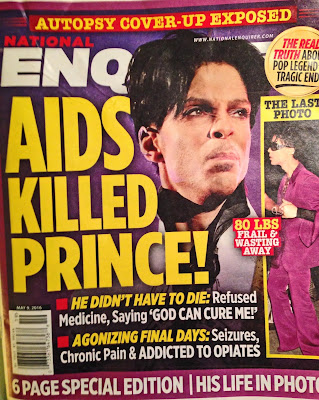 When I was checking out at the supermarket, I noticed the cashier had put a copy of National Enquirer in my bag. What the??  "I didn't purchase that," I said.

"It was on the belt so I thought it was yours," said the cashier. "You can go to the service desk if you'd like a refund."

I thought, "Why bother," and slipped N.E. back in the bag.

"AIDS KILLED PRINCE!" screamed the cover headline in a high-volume font. Additional bullets read: "He Didn't Have to Die!" "Agonizing Final Days." "The REAL TRUTH About the Pop Legend's Tragic End," was another headline. A six-page spread of "his life in photos" ensued. Another musical superstar is gone .. and within such a short time of David Bowie's and Glenn Frye's passings.

The rest of this issue of National Enquirer included all the skinny on Julia Robert's sister, Gwen and Blake, how to burn fat with some new biotrim powder ... and so much more.

Since husband was asleep, I tried to read the issue under the covers with a flashlight. UNDER the covers with a FLASH LIGHT. Even hidden, the light was too bright for this "special someone" who asked me to shut it down.

"It's after midnight!" he said from under his pillow. "What are you reading anyway?"

"I'm sleeping in the other room," husband said as his head surfaced.

I tried to turn the page silently but it was too late. He got out of bed and shuffled down the hallway.

I looked at the vast landscape of whiteness under the covers. You know that fuzzy-head feeling ... like when you've been on Facebook too long? Or watched too many YouTubes on one single subject?

Maybe the cashier at the supermarket was right. I should have gone to the service desk, returned the rag, and, instead, read a good book.