In anticipation of the upcoming special 2-hour premier of Season 6 last night, I morphed into a retro-housewife and pulled out all the stops (including my old aprons). We had shrimp dip with Charlie Chips, popped in some Pigs In a Blanket, and for cocktails had Dewar's neat. To show the love for my husband, I cooked up a Boeuf Bourguignon ... just like Meg Draper does to show her affection for Don. If I had found the chafing dishes, I might have done a quick menu switch to Sweet-and-Sour Meatballs.

Last night's episode reminded us that fondue pots are approved for entertaining. So bring 'em out! For cheese fondue, don't forget the magic ingredient:  Kirsch.

I knew from Season I: First Episode that "Mad Men" was going to be a game changer in television. Here's a reprint of my "Guest Column"that appeared in September 2007 in my favorite local paper, The Bedford/Pound Ridge Record-Review. (* Hit the reprint with your mouse to make it easier to read): 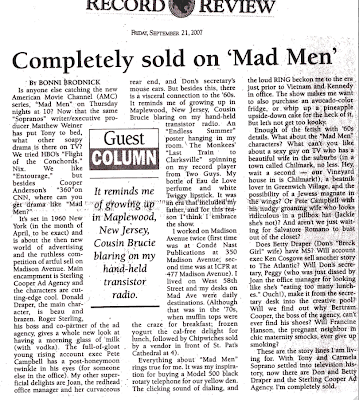