Cozy Home Gets Spooky After the Halloween Storm 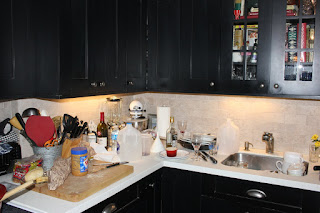 At night during the "Frankenstorm" blackout on October 31st, 2011, my husband and I sat before the blazing fireplace. With no running water or electricity, we depended on hurricane lanterns to light the way from the living room to the kitchen. We had our own flashlights for reading and I discovered that wearing a pocket flashlight dangling from my ear was a handy fashion accessory.
We drank wine, ate chocolate and, from a cranky transistor radio, listened to the repetition of the news on 880. Every hour on the 8’s, we got traffic and weather. Over and over again. And with this unexpected, unseasonal blizzard, it was as if we needed to hear the weather report more than once since it was unbelievable that only days before Halloween we were getting 16-inches of snow, howling winds, falling trees and snapped telephone poles.
Though we felt cold, wind-lashed and weary, we weren't alone. More than three million people in the Northeast, and 400,000 across New York State, were in the same boat. When New York State Electric and Gas (NYSEG) finally restored electricity days later, water and heat were restored. Andrew and I took a break from freezing and saw that outside, the fallen trees and wires on our two acres of sugar maples now looked like a sci-fi movie.
As it turned out, inside our house was not much better: it looked like my son’s fraternity. Empty wine bottles lined the mantle of the fireplace because Andrew and I were too lazy and cold to bring them alllllll the way from in front of the fireplace to the freezing kitchen.
Furniture from all corners of the living room were now clustered in closer for warmth by the fire. Dishes from days and days were scattered all over the kitchen counters. The sink was piled with mucky coffee mugs from the Saturday of the storm. Still on the stove was a half-finished macaroni and cheese casserole (which had not one iota of decay since the house was like a freezer for three days.)
On Sunday afternoon, I thought myself near-genious to throw a frying pan on top of the fire to cook scrambled eggs. Skewing raw potatoes, wrapping them in aluminum foil and cooking them on the embers seemed like a great idea, too.
Not so on Tuesday night when the electricity finally came on and I could see in the light that I had destroyed the pan. The skewers, which we had cast aside next to the fireplace—didn’t bother putting in the sink—were now a crusty mess.
Along with the bliss of hearing the washing machine whirl when the electricity turned on, loading the dishwasher became a long-lost thrill. While happily loading it with dishes, I came across a piece of something hard lying on the counter. I picked it up and turned it over to get a better look. What could it possibly be?
Wait … was that the cheese I had served on Sunday night? Why yes! It was!
During the blackout, there was no television. No computer. No iPhone, iPod or iPad, tweeting or Twitter. It was relaxing to be out of touch and not answer email or check Facebook. It was liberating not worrying that my house looked like a Delta Chi fraternity the morning-after, and refreshing not to feel guilty about being untidy. We weren’t even worried about laundry piling up. (Actually, with or without electricity, I never worry about that.)
For just a few days, nothing mattered but the basics: food, shelter, warmth … and having enough chocolate to weather the storm.
# # #
Posted by Bonni Brodnick at 11:02 PM