Will You Excuse Me While I Fall Through the Floor Now? 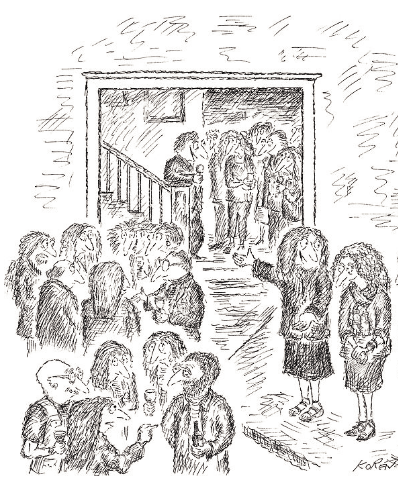 Years after graduation, I was invited by my college to a cocktail party in New York City. They were looking for money and the swanky-ness of this chic, loft setting was a good starting point.
While mingling with those gathered, I ended up in conversation with a woman whom I had no idea who she was. We talked about the school and when I attended.
“But I had the absolute worst advisor while I was there,” I said. I explained how I graduated from what should have been a 4-year college in a scant 2 ½ years.
“That’s impressive. How did you do that?” she asked. I was used to most people asking this question.
“I happened to have finished up my requirements for graduation fast,” I said. “My advisor should have encouraged me to slow down.”
I explained that he was a renowned photographer, teacher, and filmmaker. Seeking to be polite, I held up my hands to feign the parentheses' gesture and didn't say the names.
“(Name of advisor) seemed to have been distracted by one of his (star students) who is now a famous documentarian and whose moniker is used for a certain film technique."
"Here we are years later, and I’m still upset that (name of advisor) didn’t say, 'Whoa, what’s the rush? How about using the time you now have to take courses to explore different fields?'"
Pause.
“Your advisor happens to be my husband. In fact, he’s standing right over there,” she said.
Conversation stopped dead in its tracks.
I wanted to say, "Would you excuse me now as I fall through the floor?" but could only stutter, "Another glass of wine?"
She said, "No, thank you," and we both turned to pivot our conversation to the closest person we could find.