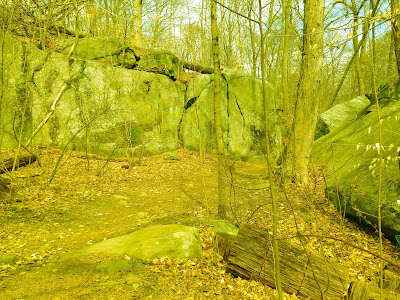 On an early walk this morning, I noticed an unusual lighting. There was a yellow cast and I know from the past that this is an indication of a forthcoming hurricane. It appeared that birds, too, sensed a storm approaching because the forest was silent. The change in air pressure alerts creatures of the impending weather. Many think because birds have hollow bones that they have this sixth sense. Rather, they use their ears, which are acutely, pressure-sensitive organs.

You are probably wondering, "What is more dangerous? A hurricane or a tornado?" They are both powerful forces of nature, but hurricanes are bigger and can do more damage. With that in your mind, if you come back and look at the photo above -- and fast-forward post-hurricane -- you will likely notice that the fallen log (on the bottom right of the photo) has been blown onto the top left ledge of the rock. The leaves, too, may have cleared from the high velocity of the wind.

According to Prof. Jonah McPhooey at the Weather Institute of Advanced Studies in Jeestring, Nevada, "Yellow light is a strong indicator that a major storm is looming. We advise citizens to dodge for cover under the nearest rock or, best, stay at home or in their cars."

What is now being coined as "The April Fool's Day Hurricane" is expected to roar through the state by midnight tonight. Coastal communities are advised to prepare for flooding, strong winds and power failures. Those citizens residing in more in-land locations are being warned to brace for heavy rain and erosion.

In what for many will be a great relief, all presidential campaign appearances and media coverage for both the Republican and Democratic parties have been cancelled in the State of New York. This absence of election news will clear the airwaves for important updates on the impending hurricane that is expected to rock the area.

IMPORTANT: Be sure to stay tuned to your radio and CNN for further updates.