Donald Trump Piñata (We're laughing AT him, not with him)

David Brooks's column today in The New York Times is aptly titled, "No, Not Trump, Not Ever."

Following are excerpts that address Trump, the man, the buffoon, the showoff, the bully ... and one of most un-presidential candidates in political history.


"Donald Trump is epically unprepared to be president. He has no realistic policies, no advisers, no capacity to learn. His vast narcissism makes him a closed fortress. He doesn’t know what he doesn’t know and he’s uninterested in finding out. He insults the office Abraham Lincoln once occupied by running for it with less preparation than most of us would undertake to buy a sofa.
Trump is perhaps the most dishonest person to run for high office in our lifetimes. All politicians stretch the truth, but Trump has a steady obliviousness to accuracy.
This week, the Politico reporters Daniel Lippman, Darren Samuelsohn and Isaac Arnsdorf fact-checked 4.6 hours of Trump speeches and press conferences. They found more than five dozen untrue statements, or one every five minutes.
“His remarks represent an extraordinary mix of inaccurate claims about domestic and foreign policy and personal and professional boasts that rarely measure up when checked against primary sources,” they wrote. 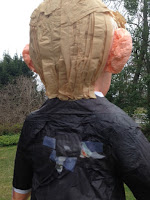 He is a childish man He is an insecure boasting little boy whose desires were somehow arrested at age 12.
running for a job that requires maturity.
He surrounds himself with sycophants. “You can always tell when the king is here,” Trump’s butler told Jason Horowitz in a recent Times profile. He brags incessantly about his alleged prowess, like how far he can hit a golf ball. “Do I hit it long? Is Trump strong?” he asks. As the founders would have understood, he is a threat to the long and glorious experiment of American self-government. He is precisely the kind of scapegoating, promise-making, fear-driving and deceiving demagogue they feared.
Trump’s supporters deserve respect. They are left out of this economy. But Trump himself? No, not Trump, not ever.

Posted by Bonni Brodnick at 1:57 AM