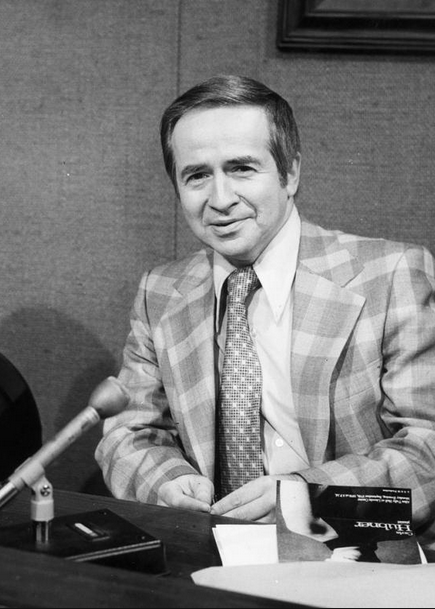 I remember working with Joe Franklin during a project for Spy magazine and J&B Scotch. We thought it would be kitsch to have him MC an event at Tunnel (a massive nightclub in Chelsea) where we buried a time capsule (which, of course, included a copy of Spy and a bottle of J&B).
Anyone remember Tunnel? (Anyone stop by that night for free and flowing J&B?) The event, part of a "Spur of the Moment" series in which party-going, hip Manhattanites would call a phone number at a certain time that day, and we would announce where the place "to be" was that night in NYC. It was an irreverent adventure and tons of fun. One summer night we showed a movie on a cleared lot in the West 20s.

Before the Tunnel event, I remember going to Joe Franklin's office at WOR-TV. Newspapers were stacked to the ceiling on his desk and floor. (It was hoarder's dream.) He was a clippy New Yorker wearing a big check jacket. There was an impish perkiness to his smile (and he was one of the only men I had ever seen wearing cosmetic foundation off-set.)

Joe Franklin was perfect for the Spy event. This TV talk-show and radio pioneer in his own right would bring a a seasoned  showbiz "cleee-esss" to the happening.

His voice is inimitable. Unless, of course, you're Billy Crystal.

Here's a clip of Joe Franklin appearing on "Fresh Air."http://www.npr.org/player/v2/mediaPlayer.html…


TERRI GROSS: You are famous for some of the most generous introductions to your guests. Do you think of it as a courtesy to flatter a guest after you've invited them on?
FRANKLIN: Yeah, I make them feel good. I give them a buildup - 'Ladies and gentleman, the one, the only...'- this party getting rave reviews, critical acclaim, accolades. And then I would say 7 times out of 10 they deserve it, 3 times out of 10 they don't. But if we book them onto the show, we like to make them feel good.
Wistful and reminiscent, Joe Franklin brought a sense of seasoned showbiz and kitsch to the Tunnel/Spy/J&B event. It was one of those "New York Moments."

If you want to read more, R.J. Marx, esteemed editor of the Bedford-Pound Ridge Record-Review, co-wrote a wonderful book with Joe Franklin --  "Up Late with Joe Franklin: Stories of the Greats, The Near-Greats, The Ingrates, The Has-Beens and the Never Weres" (Scribner, 1995). (I love the cover, too.) Now about that time capsule ...

Posted by Bonni Brodnick at 1:04 PM

Yup, he was such a nice guy. Friendly as all get out. He will long be remembered as one of New York's top radio and television personalities.