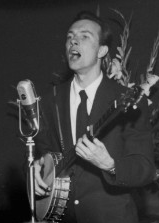 When I was about 3-years old, my parents took my brother, sister and me to a Pete Seeger concert at a Friend's meeting house in Pennsylvania. I remember so clearly listening to his music as he sat on a rocking chair on the front porch, lit by a single bulb, and strummed his banjo. As we all sat huddled on a blanket, it was a memorable chilly October evening of my childhood, made all the more richer by his message of peace and goodness.

“The key to the future of the world is finding the optimistic stories and letting them be known," Seeger said in 1994.

President Obama released a statement following Seeger’s passing that read, “Once called ‘America’s tuning fork,’ Pete Seeger believed deeply in the power of song. But more importantly, he believed in the power of community – to stand up for what’s right, speak out against what’s wrong, and move this country closer to the America he knew we could be. Over the years, Pete used his voice – and his hammer – to strike blows for worker’s rights and civil rights; world peace and environmental conservation. And he always invited us to sing along. For reminding us where we come from and showing us where we need to go, we will always be grateful to Pete Seeger.”

Posted by Bonni Brodnick at 7:14 PM