Last night was truly thrilling at the Brodnick house as our beloved (domestic house) cat, Truman, brought in a flying squirrel. 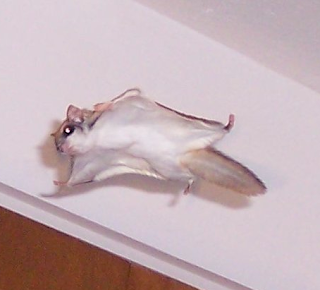 Southern flying squirrels have grey brown fur on top with darker flanks and are a cream color underneath. They have large dark eyes and a flattened tail. They have a furry membrane called a patagium which extends between the front and rear legs, used to glide through the air.

Southern flying squirrels feed on fruit and nuts from trees such as red and white oak, hickory and beech. They store food, especially acorns, for winter consumption. They also dine on insects, buds, mushrooms, mycorrhizal fungi, carrion, bird eggs and nestlings and flowers. Predators include snakes,[3] owls, hawks and raccoons. Domestic house cats can be dangerous to these animals.


Thankfully, we were able to rescue the poor thing in a shoe box and set him free outside.

Posted by Bonni Brodnick at 8:02 PM

Bonni Brodnick
Bonni Brodnick is the author of POUND RIDGE PAST: Remembrances of Our Townsfolk, a blogger at “Bonni Brodnick Blog,” and a Stroke Survivor memoirist. She is a member of Pound Ridge Authors Society and a contributor to Medium and HuffPost. She was editor/art director of a magazine for a prestigious boys’ school in Connecticut. Bonni has written for Condé Nast Publications’ Glamour, and House & Garden; as well as The Los Angeles Herald Examiner Sunday Magazine; Bedford Magazine; Greenwich Magazine; and Children’s Television Workshop. She was a member of Writers Guild of America, East. Bonni has appeared on radio on “The Lisa Birnbach Show” and on TV: ABC-TV “Good Morning America”; WNBC-TV “Live at Five”; and WCVB-TV [an ABC affiliate] “Good Morning Boston.” Bonni also founded/wrote a weekly newspaper column, “Talk of the Town” for the Bedford-Pound Ridge (N.Y.) Record-Review.